With the greatest humanitarian crisis to hit our world in modern times, the drought in the Horn of Africa has become the focus of charitable activity across the world. Millions of children are facing death. Millions more are becoming displaced and will require re-settlement. And the situation is worsening daily.

The Disasters Emergency Committee (DEC) and the 14 overseas development agencies it represents are raising awareness and funds to improve the chance of survival for those effected. Every penny helps.

Local radio 103 The Eye is raising awareness by running a day-long Appeal on Saturday 30 July, featuring interviews with DEC organisations and local experts. We'll be talking to people who have recently returned from the drought area and hear what can be done to help. We'll also be speaking to celebrities about their involvement.

103's listeners are invited to take part in this special day by choosing a piece of music that means something special: this is your opportunity to email or phone in your LIFE TRACK story to be played on air on Saturday 30 July.

Either pick your own track or choose one of those suggested for you by 103 presenters, which will be listed in advance online and in local press.

On Saturday 30 July, 103 The Eye is dedicating the entire day's broadcasting to raising awareness of the DEC East Africa Crisis Appeal.

We've had warm weather across the East Midlands in recent weeks, but there's still food in the shops and water in our taps, rivers and streams but In the Horn of Africa there have been months of drought followed by the severest famine in living memory. In a daily worsening situation, millions of people are facing death.

So 103 The Eye is supporting the Disasters Emergency Committee and encouraging everyone to help by donating direct to the DEC East Africa Crisis Appeal.

All day on Saturday 30 July we'll be broadcasting interviews and information about the situation in Africa and we're asking you, our listeners, to share the day with us by telling us your life stories through your favorite music. Details about LIFE TRACKS are available here, on 103 The Eye and in the local press over the coming week.

But don't wait to donate - your money can be put to good use right now. Just follow the instructions in red on the side bar and help the DEC's member organisations to save lives immediately.

Saturday 30 July will be DEC East Africa Crisis Appeal day on 103 The Eye. We look forward to sharing the great day with you!

In recent days famine has been declared in two areas of Somalia.

Concern has been expressed that Somalia's rebel forces are exacerbating the humanitarian difficulties and refusing access by some agencies, fortunately not those associated with the DEC.

Today an emergency meeting was held in Rome at the UN's Food & Agricultural Organisation, called by the French Government which currently chairs the G20.

Josette Sheeran, Head of the World Food Programme, was in Somalia last week and reported to the meeting that half a million children will die in, "The worst food crisis many of us have ever seen."

She said, "This is a children's famine."

“This is the most urgent food crisis in twenty years, with more than 11 million people in need of humanitarian assistance in Kenya, Somalia, Ethiopia and Djibouti. The young are affected disproportionately and parents have been forced to watch their children die.

“Despite our efforts and those of other aid agencies, the UN appeals are still underfunded. This is a clear-cut example of where money is the limiting factor, and the more generous people in the West are, the more lives we can save. It’s as simple as that.”

Archbishop of Canterbury issues urgent appeal for the Horn of Africa - originally posted 16.4.2011

"It is devastating to see once again the images of famine haunting our world, as parts of Somalia, Kenya and Ethiopia face one of the worst droughts for 60 years. Lives are being devastated – more than 11 million people desperately need emergency relief, as well as long term solutions to support sustainable farming and prevent this crisis repeating itself.
"Children and other vulnerable people are dying – the urgency is intense to prevent this disaster reaching a point of catastrophe; to ensure that we do not fail our fellow human beings in the Horn of Africa.  In the longer term progress is possible: I saw it myself last month in a drought-struck part of Kenya, where local communities were being taught how to adapt to climate change through a local Church initiative.

"In Britain we can be encouraged by the response from the Department for International Development, which is leading the way in the international community in responding rapidly and effectively. The British public is also giving generously through the DEC appeal. This needs to continue, saving the lives of the young and the weak right now - and building for their future."

"This is the first famine in a century that should never have known famine.

"Thousands of people have already died and millions are on the edge of survival.

"The most vulnerable are the children and the elderly.

"Yet a little money makes a real difference to these precarious lives, which is why the Disasters Emergency Committee warmly supports the all-day East Africa Crisis Appeal by 103 The Eye on Saturday 30 July.

"Thank you and your listeners for helping those in so much need." 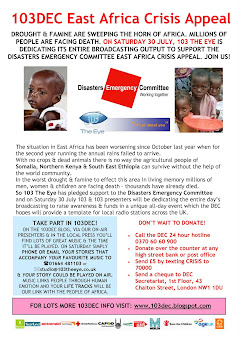